This Means War movie (2012) was trashed by critics and deservedly so. The plot is absurd, there’s no character development and the whole thing is just plain stupid. 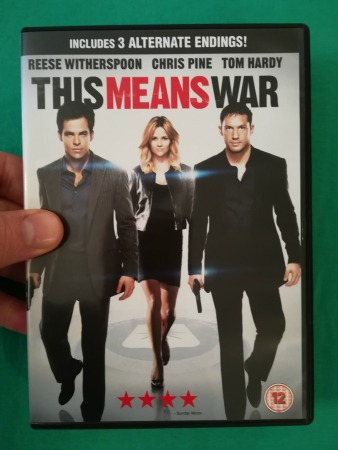 The story: Tuck and FDR are two CIA agents and best friends. They’ve been assigned to desk duty after a covert operation in Hong Kong goes wrong. Tuck, who’s recently divorced starts dating perky Lauren after seeing her profile on a dating site. FDR meets her too (on the same day) and also starts dating her. When they discover that they’re both seeing the same woman they decide to let her choose between them. Using America’s high-tech facilities they soon start to sabotage each other’s dates with Lauren.

This Means War was a flop in the US and was saved only by international audiences which helped recoup its budget. It’s taken from a script that was floating around Hollywood for a long time and is basically the product of a marketing meeting where it was decided that the makers needed a chick-flick that guys would want to see too.

Yes, it’s slick and polished but nothing about the movie makes sense. There’s no character motivation, the inept action sequences which are clumsy and infrequent feel tacked on and the movie doesn’t care about the subplot which might as well not be in it.

The guys have good chemistry but that’s little consolation with what they have to work with. Pine comes across as an abusive arrogant sleeze and Hardy is crazily miscast as the plain one. But by far the worst off is Reese Witherspoon who has to act so dumb she can’t even make a decision.

Cynical, nasty production line rubbish totally devoid of any heart or soul, This Means War is a disappointingly awful slapdash rom-com with spy stuff stuck on to it.