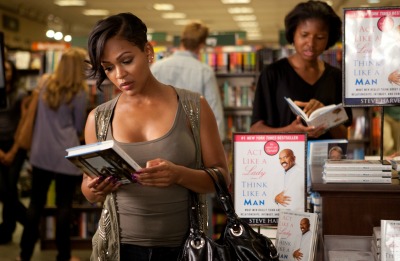 Think Like a Man is an often fun, if slightly muddled and frequently frustrating attempt at an ensemble comedy. There’s a lot to like here and for lovers of romantic comedies that enjoy a good farce, this is definitely a good movie. However, the overworked script and jumble of characters tend to cloud what could’ve been a much slicker operation.

It’s certainly a well-acted film with an expansive ensemble cast and everybody does their jobs well and sells their roles. With a pretty decent script as well, the comedy shines when it’s romantic leads, Dominic Ealy and Taraji P. Henson, are given enough room to move. As always, Kevin Hart gets a few good belly laughs as well.

The main conceit of the film is that a group of women find Steve Harvey’s “Act Like a Lady, Think Like a Man” and decide to take its lessons out into the real world. Hilarity and hijinks ensue and honestly, it’s not a bad basis for a few goofs. The initial confusion of the male cast at the hands of the female leads gets a few genuine yucks and even the most jaded of viewers should find something here to enjoy.

The direction is solid, nothing to blow you away, but good enough to allow the cast to do what they do best. Tim Story certainly looks more at home here directing a romantic comedy than he ever did with something like Fantastic Four. Again, nothing too flashy, but a perfectly competent outing.

There’s nothing overly offensive in terms of performances, writing or directing. It isn’t a stand out in any of those areas but the film doesn’t necessarily suffer for it either. That being said, the scriptwriters could’ve limited a couple of the storylines that go nowhere in favor of focusing more on the main narrative. As it stands the whole film is a little muddled and lacks any real narrative thrust. With a bit of trimming the script could’ve had some real punch but instead, it kind of dawdles home through the third act.

One issue I personally had with the film is its adoration for the Steve Harvey book from which it takes its name. I understand that it’s paying homage to the source material but it’s reverence of the tome in such degrees often put me off. I think the film would’ve been better served by getting some extra character development in, rather than lavishing lingering shots on Harvey’s work.

Think Like a Man is a jolly romp but one that doesn’t really do enough with its talent and does a little too much for its inspiration. It’s not so tiresome that you won’t get a few laughs out of it but don’t expect to come away with a new all-time favorite either. I’d say, check this one out if it comes your way but if you missed it in the cinema, don’t lose any sleep over it.