There’s Something About Mary (1998) Movie Review 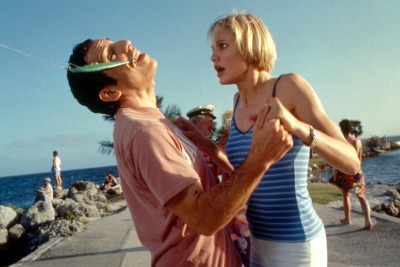 The 1990s were halcyon days for cinema of all genres and, as seminal ’90s comedies go, There’s Something About Mary is up there with the best, funniest and most downright charming of the lot. Directed (and co-written by) the men behind the earlier critically-acclaimed comedic gems Dumb and Dumber and Kingpin, There’s Something About Mary arguably surpasses its predecessors for sheer hilarity and unique comedy moments.

The film stars Cameron Diaz as the eponymous Mary Jensen – a beautiful young lady with many longing admirers - and Ben Stiller (in a star-making role) as Ted, one of Mary’s potential suitors. They are ably backed up by a superb supporting cast including Matt Dillon, Lee Evans, Sarah Silverman and Brett Favre (yes, the NFL superstar!) as well as being aided by a great soundtrack.

The film begins in Rhode Island thirteen years prior - with Ted and Mary preparing for a disastrous, but painfully funny, prom date; a day which cemented Ted’s fixation with the woman of his dreams. Fast forward to the present day, and Ted is still obsessing over “the one who got away”. Convinced by his best friend, Dom, to hire a private detective to track her down, Ted turns to Pat Healy (the ever-excellent Matt Dillon). Things begin to go awry when Pat, in turn, develops a massive crush on Mary; and he subsequently tells Ted to give up on her, falsely claiming her to be obese with multiple children.

It turns out that Mary is still single and living with a friend in Miami, so Ted ignores Pat’s fictitious description and decides to track her down to let her know his feelings for her. From here, there ensues jostling between Ted, Pat (who uses increasingly unscrupulous – and ridiculous – tactics) and Mary’s architect friend, Tucker (played by British comedian Lee Evans) to win her affections. It would be remiss of this review to spoil any of the truly excellent comedy scenes but, suffice to say, after Ted and Mary’s reunion date many viewers will find themselves thinking differently about their hair product.

Despite being a reasonably low-budget production, There’s Something About Mary became the highest-grossing comedy film of 1998 – and the fourth-highest grossing film of the entire year. Diaz nabbed a Golden Globe nomination for her turn, and the film made the American Film Institute’s Top 100 Comedy Films of the 20th Century - praise indeed.

As a “15”-rated film, there are a number of somewhat crude moments and scenes that may be slightly offensive to those of a sensitive disposition, but please don’t let this dissuade a potential viewer - there’s an undeniably sweet center to this story.

With almost twenty years having passed since the film’s release date, there’s sure to be a lot of younger comedy fans who’ve not yet had the pleasure of watching it. I can assure anyone dubious of such an “old” comedy, that nothing in the humor has been lost in the preceding two decades. In fact, it’s now time for a generation of fans to find out that there is, indeed, something about Mary.