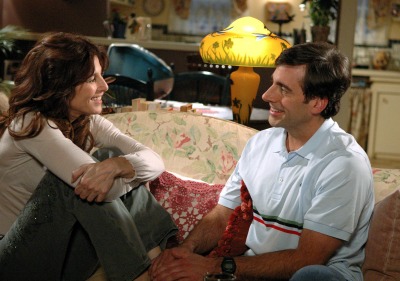 With such a title, The 40 Year-Old Virgin seems destined to be a crude movie with over the top sexual humor. Sure, it has that, but with a touch of sophistication and realism that makes it a great comedy to watch with a brilliant ensemble.

The movie tells the story of Andy, played wonderfully by Steve Carell. Andy is indeed a 40 year-old virgin who seems to be quite content in the routine of his life: cycling to his retail job every day and basically just keeping to himself and living a solitary life collecting action figures and playing video games.

His life is disrupted considerably when, on a whim, his male co-workers ask him to join them in a game of poker. It’s at this game as the other men begin to talk about women and sex that it becomes apparent that the naïve Andy is a virgin.

His new found friends make it their mission to try to get Andy to finally have sex. His friends, played brilliantly by Paul Rudd, Seth Rogen and Romany Malco, each have a unique strategy, and Andy plays along with hilarious results. He goes to bars to try to bed a drunk woman, he tries speed dating, and various other techniques his womanizing friends seem to think will help him.

Andy ends up meeting a woman who really interests him, named Trish (played by Catherine Keener) and he ignores his friends’ advice to take a chance on real love.

Some of the funniest moments in the movie come from scenes that were improvised by the cast. In a ploy to help Andy become more attractive to women, one of the guys suggests he wax his chest. In this scene, Steve Carell is not acting. He was actually having his chest waxed and the reactions from himself and his fellow actors are genuine and hysterical. The poor woman who was ripping off the wax strips had a hard time keeping a straight face as well making the scene even more endearing.

The chemistry amongst the cast is also real and evident. Much of the playful banter was unscripted and you can sense the realism in the interactions and even the awkward silences that make this movie more relatable and realistic than most comedies. Insults are genuine and this is most evident in a scene between Paul Rudd and Seth Rogen when they’re talking about how they know the other guy is gay. Politically incorrect, yes. Hysterical, absolutely!

Steve Carell is definitely the star of this show. In his first leading role in a movie, he’s believable and adorable. When this film was made, Carell was married with two children, but he effortlessly falls into the role of a man uncomfortable with exploring his sexuality and even speaking about it.

The movie succeeds in that although it’s a comedy filled with crude sexual humor and ridiculous insults amongst a highly compatible cast, it goes deeper than that. Andy isn’t just some random, creepy guy, but instead he’s a man who views sex as tied in with love and has built it up so much that it’s hard for him to imagine just doing it to get it over with.

The characters are well developed and multi-dimensional and this is definitely a comedy that’s great for those just looking to laugh, but also for those looking for something deeper.