Salmon Fishing in the Yemen

Salmon Fishing in the Yemen, directed by Lasse Hallström (The Cider House Rules) was nominated for 3 Golden Globe Awards. The script by Simon Beaufoy focuses on a man who makes changes in his life and is quite different from Paul Torbay’s book which focuses more on political satire. 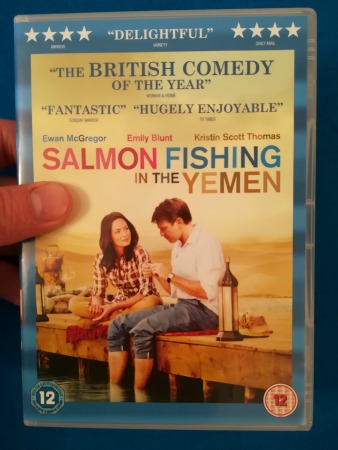 The story: A wealthy sheikh wants to bring the sport of fly fishing to the Yemen. The project will be extremely expensive but he instructs his London-based financial adviser Harriet Chetwode-Talbot to start the ball rolling. Harriet emails fisheries expert Dr. Alfred Jones who believes that the mammoth task is both ludicrous and unfeasible. After a mosque is blown-up in Afghanistan, the Prime Minister’s press secretary Patricia Maxwell needs a good news story from the middle-east so she puts pressure on Alfred’s boss to make the salmon project happen.

The movie deals with themes of love, faith and the belief in the unobtainable. It’s a story of hope and of going after your dreams and turning them into reality even when the odds are really stacked against you.

Blunt and McGregor work very well together and their romance is believable. Their relationship is real with its complications and flaws and there’s a funny and charming dynamic between them because they’re both quite different. Harriet is upbeat and hopeful while Fred is set in his ways and somewhat repressed and even though he strives to offend her she’s more baffled and amused by him than offended.

Salmon Fishing in the Yemen is gentle and uplifting and it has a sense of decorum and a formality that’s charming but the story requires a giant leap of faith and it gets a little lost along the way.