Despite its provocative title, Knocked Up movie (2007) is an unconvincing love story with hardly any likeable characters. The cast can’t wring many laughs out of the dumb script which relies on shock value and gross-out comedy. Directed by Judd Apatow, who brought us the equally hyped-up Forgetting Sarah Marshall. 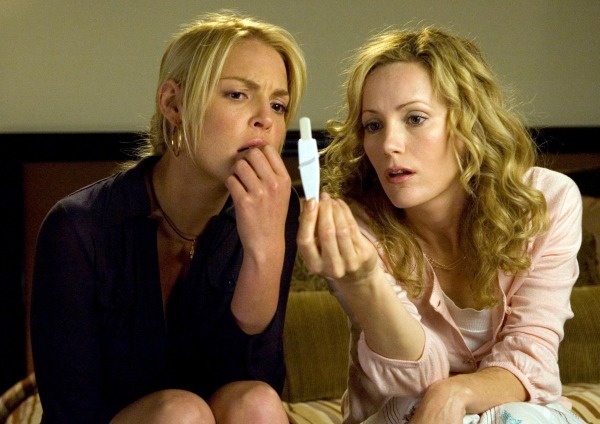 The story: Alison Scott works at “E! Television” and has just gotten a promotion. To celebrate she goes nightclubbing with her older married sister Debbie. While at the bar Alison meets slacker Ben Stone and they start chatting. After lots of drinks and dancing, she takes Ben home and the two end up between the sheets. They have sex without using protection and eight weeks later she discovers she’s pregnant.

The biggest problem with Knocked Up is it’s premise. Who in their right mind would believe that Alison would sleep with Ben, yet alone have a baby with him? It’s so preposterous that it’s difficult to care if they’ll even end up together. Also, the fact that Alison doesn’t run a mile from his slacker friends beggars belief.

Heigl is ok, but she’s hampered by Apatow’s poorly written script while Rogen isn’t very memorable and is better in supporting roles. The script has lots of profanity, bodily function jokes and dialogue that’s offensive to women. You might find it funny if you’re drunk or if you happen to be a teenage boy.

The movie’s pacing is very slow thanks to a running time of over 2 hours, 30 minutes of which needs to be on the cutting room floor. There’s too many scenes of Ben’s friends. How many times do we need to see them sitting around uttering juvenile dialogue?

As in Forgetting Sarah Marshall, Kristen Wiig comes out best. The movie lifts a little when she’s on screen which unfortunately isn’t often enough.

Most Knocked Up movie reviews were overwhelmingly positive which is a complete mystery to this reviewer. If you manage to get through it, the only question you’ll ask yourself is: why does Hollywood keep green-lighting Judd Apatow projects?