It’s Complicated movie (2009) is a funny love triangle made for grown-ups. The casting is spot on as Meryl Streep and Alec Baldwin have knock-out chemistry but it’s Baldwin who gets the biggest laughs. Rich with snappy dialogue and an upbeat soundtrack, it’ll keep you guessing right up to the end. 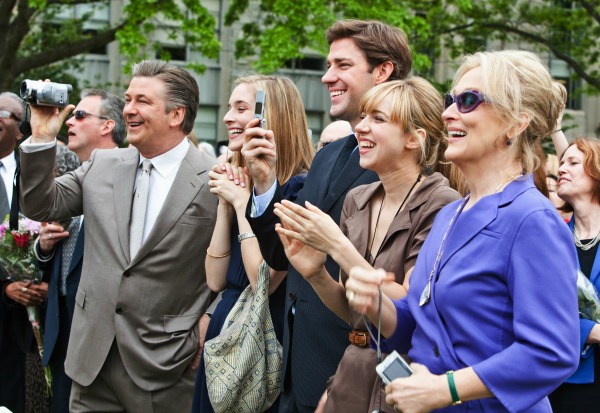 The story: Jake and Jane have been divorced for ten years. Jane’s single and Jake is now married to the much younger and very controlling Agness (yes, that’s a double s!) who has a child from a previous relationship. During a trip to New York for their son’s graduation Jake and Jane start drinking in the hotel bar. One thing leads to another and they end up in bed together. Sensitive architect Adam who is designing Jane’s new kitchen extension has the hots for her too.

Writer and director Nancy Meyers has a string of hits behind her thanks to a specific formula - she makes romantic comedies that appeal to older audiences. With It’s Complicated, she gives us one of the best rom-coms of 2009.

What makes the movie work is it’s intelligent and funny script and the fantastic chemistry between the cast. It’s nice to see 50-something characters (especially Californians!) falling in and out of love.

Despite some familiar rom-com tropes, what makes the film feel very fresh are the performances. Streep is superb with some comical reactionary shots and Baldwin sends up his tough guy image with great fun. Steve Martin is also marvelous playing against type as the straight man. They all look like they’re having a blast with their respective roles.

The film is filled with some nice moments. Listen out for the French song Mal ô Mains (hands are hurting) playing while Jane and Adam are in the bakery at night rolling pastry to make chocolate croissants.