Directed by Nicholas Stoller, Forgetting Sarah Marshall movie (2008) did well at the box office and got mostly good reviews but it’s about as dumb and low brow as they come. The lackluster cast, raunchy humor and the vacuous plot all fail to engage making it one of the most uninspired films of that year. 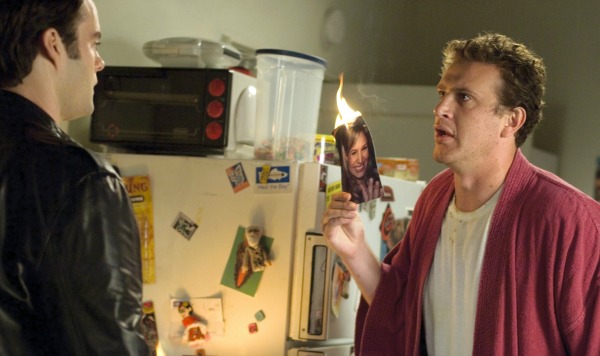 The story: Lazy music composer Peter is devastated when Sarah, his girlfriend of nearly 6 years dumps him for another guy. After a series of disastrous one night stands, Brian, Peter’s step-brother suggests a vacation to take his mind off Sarah. Peter decides to go to Hawaii but when he’s checking in to his hotel he meets his ex and her new boyfriend, English rocker Aldous Snow. Still heartbroken until he meets Rachel who works at the hotel’s front desk, Peter tries to move on with his life.

Produced by Judd Apatow who also directed Knocked Up, Forgetting Sarah Marshall has many flaws. It’s premise is razor thin and is “borrowed” from a classic episode of Frasier and the Steve Martin movie, The Lonely Guy. What’s barely enough plot for a half hour sitcom is painfully stretched to a 2 hour movie.

Jason Segel’s autobiographical script, laden with dumb and repetitive humor relies too much on dick jokes. Segel is alright as a supporting character but as the leading man, he’s lacking in sex appeal and strength. His character Peter is a drip who has zero chemistry with Kristen Bell and it’s difficult to believe their relationship.

Supporting characters Bill Hader, Jonah Hill and Paul Rudd never really get going and the women in the movie while beautiful are depicted as less than interesting characters.

At nearly 2 hours long Forgetting Sarah Marshall is lazily constructed and incredibly tiresome. More use could have been made of Kristen Wiig, who’s funnier than any of the lead characters. This is one to avoid.