The Bounty Hunter film (2010), a road movie brought to us by Andy Tennant, the director of the Will Smith film Hitch, doesn’t deliver much. From the ludicrous mystery to the awful dialogue, it’s painfully unfunny and easily forgotten. 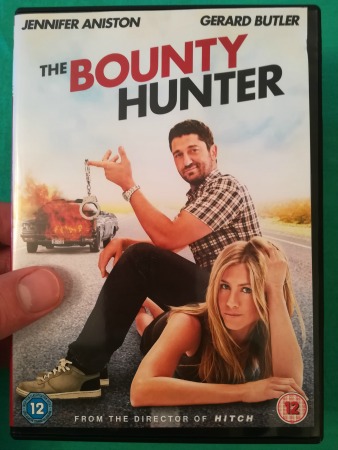 The story: Ambitious investigative journalist Nicole Hurley is on the trail of a big story involving police corruption. When she misses her trial date for driving into a police horse, the judge issues a bench warrant for her arrest. Broke bounty hunter and former NYPD detective Milo Boyd, who happens to be Nicole’s ex-husband is offered $5,000 to bring her in. Milo can’t believe his luck and sees arresting his ex-wife as an easy job. However, once he apprehends Nicole he gets more than he bargains for.

What a disappointment this turned out to be. It’s the first pairing for Jennifer Aniston and Gerald Butler and it could be their last. You’d think that because it featured such big stars that it’d be a blast but nothing could be further from the truth.

The main reason you don’t want to see this movie is the plot which feels so generic, is full of holes and has no surprises. We’ve seen it all before - former couples thrown together, they bicker and they fight and this is one of the worst. Also, Aniston seems to be playing the same part again and again which is Rachel Green from Friends.

The two good-looking leads are let down by a woefully dull script and the premise could’ve been more interesting but the filmmakers didn’t know what to do with it. Tennant’s direction lacks fun and pace and writer Sarah Thorp’s script is predictable, idiotic and has too many subplots thrown in.

Even if you’re a fan of its two stars you’ll be disappointed as the laughs are few and far between. It’s overlong, not as entertaining as it could’ve been and the result is a total straight-faced experience. Basically, if you’ve seen the trailer then you’ve seen the movie.