About a Boy movie has an interesting premise about two people who help each other to grow up and although it’s pleasant, it’s hardly remarkable. It may appeal to male viewers who are tiring of the Hugh Grant charm. 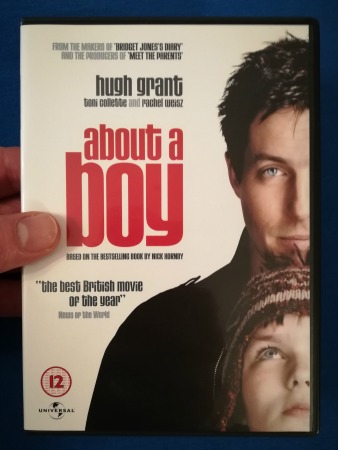 The story: Will Freeman is a wealthy Londoner in his 30s who lives off the royalties of a Christmas song his father wrote. Pretending to be a single dad, he attends lone parent meetings in the hope of bedding available women. Through one of his hookups, he meets awkward, preteen Marcus who lives with his depressed mother, Fiona. Marcus tries to do what he can to help his mother but he’s bullied at school because he speaks and sings to himself. Will and Marcus are opposites but become friends and offer each other lessons in growing up.

About a Boy (the third adaptation of a Nick Hornby novel) is based on the very successful book and features lots of talented British actors. It was unusual to see American directors attached to a very British subject and the movie was originally meant to be set in the States with George Clooney as the lead.

Hugh Grant seems to play the role of the English fop over and over again but there’s a slight twist here as his character isn’t as posh as his other more famous roles. He’s likeable and believable as shallow Will who tries to pick up women by pretending to be a single father and the movie is pretty okay when he’s onscreen doing his best with the average material. Hoult, while a good actor unfortunately doesn't fare as well and seems out of his depth playing the troubled Marcus.

The film has it’s faults as it skirts plausibility at times and there really aren’t many funny or memorable moments and no crisp one-liners. You get the feeling that had it been directed by Richard Curtis it would have been a much better picture.

Watch About a Boy Movie Now