Lacking in imagination and depth, 40 Days and 40 Nights is a clumsy and poorly edited tale that runs out of ideas fast. First-time screenwriter Robert Perez makes a mess of an idea that could’ve been developed better. It has Josh Hartnett but nothing else and it offends rather than entertains. 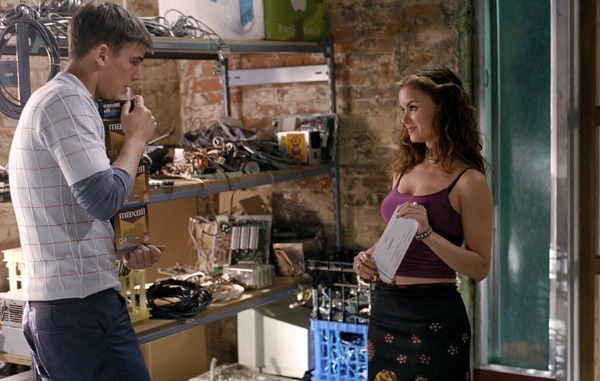 The story: Matt Sullivan, a San Francisco dot.commer has just been dumped by his girlfriend Nicole who’s now engaged to someone else. After dating lots of girls he still can’t get Nicole out of his mind. To please a demanding partner he’s shocked to find himself faking an orgasm and so decides to abstain from all forms of sexual activity for Lent. Even his brother John, who’s training to become a priest advises him that chastity isn’t easy. In the meantime, Matt’s co-workers start taking bets on whether he can stay celibate. A few days later, while at his local laundromat he meets cyber-nanny Erica and then the complications begin.

This has to be one of Josh Hartnett’s worst movies. He was pretty good in Pearl Harbor and Hollywood Homicide but here he’s stuck in one-joke plot hell.

There’s hardly any comedic moments and what jokes there are we’ve heard countless times before. There’s an excruciating scene where Matt’s dad discusses his sex life now that he’s had hip replacement surgery which falls completely flat.

Short on surprises, 40 Days and 40 Nights offers nothing new to the genre. Hartnett is wasted and he’s unable to lift the film out of it’s doldrums. Also, the movie felt longer than it’s 93 minutes running time. Disposable and forgettable.